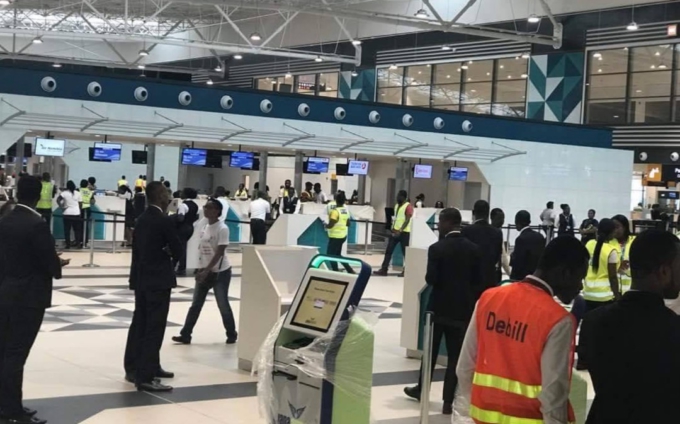 The Noguchi Memorial Institute for Medical Research of the University of Ghana has started testing the potency of a Covid-19 Polymerase Chain Reaction (PCR) Detection kit.

The kit is to be used for testing international passengers when they arrive at the Kotoka International Airport and other ports of entry are re-opened in September.

This comes after President Akufo-Addo in his 15th address to the nation said there is an ongoing stakeholder’s engagement to re-open the airport next month.

The trial of the kit is expected to be completed within days and a decision made on the final modalities for the re-opening by August 26, 2020, Business24 has reported.

“Preliminary COVID-19 safety modalities under discussion require departing travellers to show proof of a negative PCR test before being allowed to access the departure hall of Terminal 3—which is used for international operations—and to undergo temperature checks at the entrance and wear face masks throughout their pre-departure formalities,” it said.

Passengers arriving in the country will have to take the test at the upper arrival section of KIA’s Terminal 3.

“Only in-bound passengers with negative PCR tests will then be allowed to descend to the arrival hall to complete their arrival formalities and exit the terminal,” the report said.

According to Business24, the other two options on the cards include allowing arriving passengers with credible PCR test results from specialised hospitals in their place of embarkation to fill out a comprehensive form detailing their physical home address, work address and other necessary details. Subsequently, a specially designed technology will be deployed to track and monitor them while the new PCR test results are released within 24 hours.

“Proponents say this option will prevent congestion at the airport and facilitate the process, but it is unlikely to be accepted given the stance by President Akufo-Addo that all persons arriving must be tested to prevent a second wave of COVID-19 infections in the country.

The Health Ministry on Thursday said it will fully cooperate with the airport’s management to develop the enabling protocols for ensuring passengers’ and staff’ safety.

It said the airport’s management must ensure that wearing of face masks is compulsory for all arriving and departing passengers; ensure there is no congestion at all sections of the airport, and ensure social distancing at the facility.

However, airlines have raised concerns about how to avoid overcrowding during the peak time of between 6 – 11 pm at the terminal.

According to Business24, major international airlines servicing the KIA fly into Accra in the evening 6 – 10 pm, transporting thousands of passengers who may crowd the international arrivals area and stress port health officials conducting the PCR tests, possibly creating a chaotic situation.

The suggestion that arriving passengers should be disembarked in batches upon arrival, operators say, will create undue delays for airlines.

Typically, wide-bodied aircraft operators that transport between 280-300 plus passengers have a turnaround time of about 75 minutes, but if they are to disembark passengers in batches, they may require up to two hours in turnaround time. This may likely disrupt connecting flights at their home-base.

The Board of Airlines Representatives (BARGH)—made up of country managers of airlines—and the Airport Operators Committee (AOC)—made of airport managers responsible for airport operations—have called for adequate simulation exercises to ensure a smooth take-off after re-opening. https://tpc.googlesyndication.com/safeframe/1-0-37/html/container.html

“The same way we did a simulation exercise before the re-opening of Terminal 3, I personally think we should take time to do same for the re-opening of the airport for international operations,” Ahmed El-Banhawy, Egypt Air Country Manager, told the Business24.

Open chat
1
Powered by
Hello.... How can we help you?
Please login to add this job. Click here to login